I have a confession to make.

I Decide by Lindsay Lohan is still my jam.

I can even get down to Rumors.

Over was another, uh, classic. Or something.

She’s no Hilary Duff, but you know, it wasn’t all bad. It wasn’t great but you know, at least she tried. The furthest I’ve gotten is singing to myself at midnight (all fun and games until you realize that there’s a person in that car across the street).

Yeah, anyway, I just felt like I should admit to this. I should probably end the post here.

I was perusing my favourite gadget and beauty products website when I saw this:

First question: what kind of douchebag would use this thing?

Yeah, but why does it have to go around the neck? Why not just normal speakers? No one on this Earth needs neck speakers. If we want to pick up audio things that we’ve missed, that’s what earphones are for. 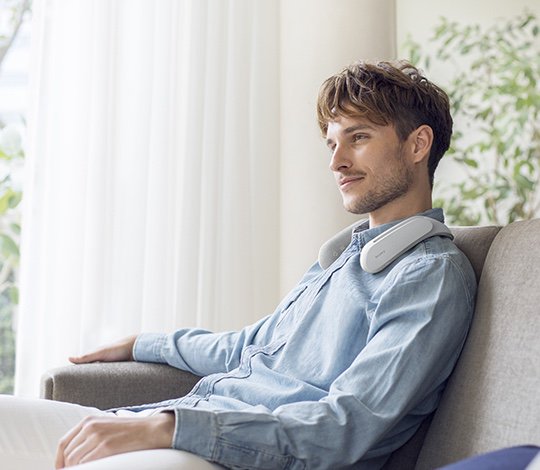 Look at how ridiculous he looks! So douchey. It looks like some kind of hipster neck pillow. 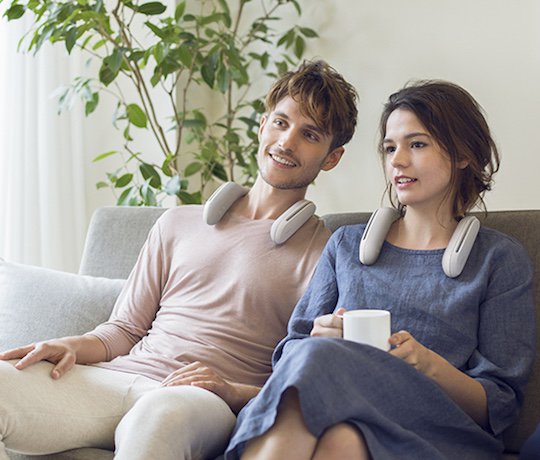 Netflix and chill gone mad. I’m telling you. They could at least come up with a double neck speaker option. This looks so stupid. If I catch any of you with this…

Not to be outdone, Panasonic seem to be vying with Sony in the dumb gadgets stakes.

Or people could just wash their clothes. What difference does it make if you leave something festering overnight. It’s still going to stink and why spend four hundred dollars when you can just Febreze it later (and that’s only if you really don’t want to just wash it).

This has to be one of the dumbest, most useless things I’ve ever seen. A deodorising hanger. I’m convinced that this site is just trolling at this point.

Takes 5-7 hours to clean a garment

I rest my case.

I’m back with another wacky Japanese product. This one is truly astounding. 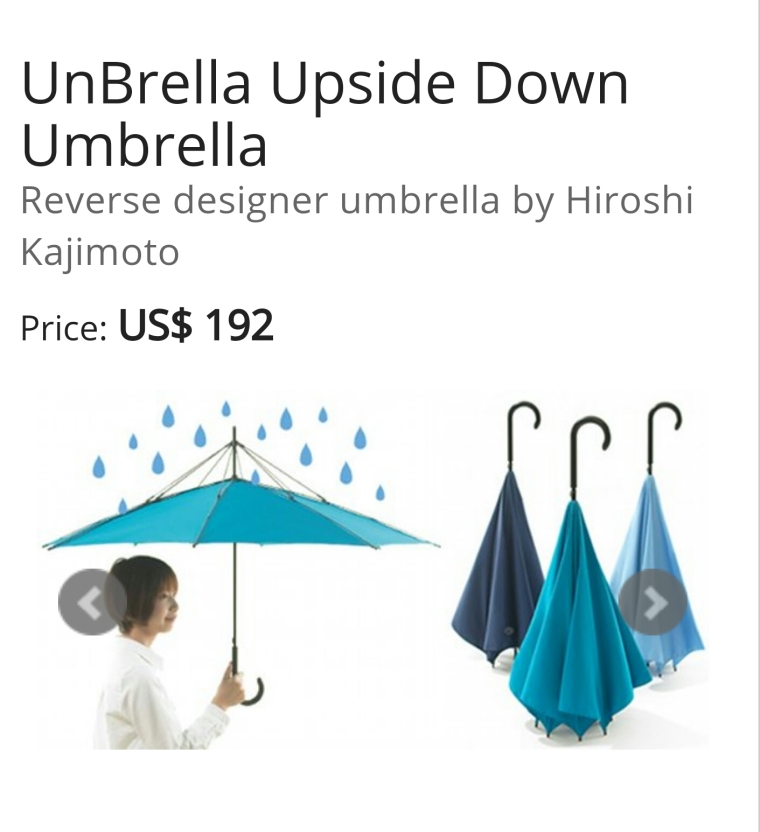 An upside down umbrella. 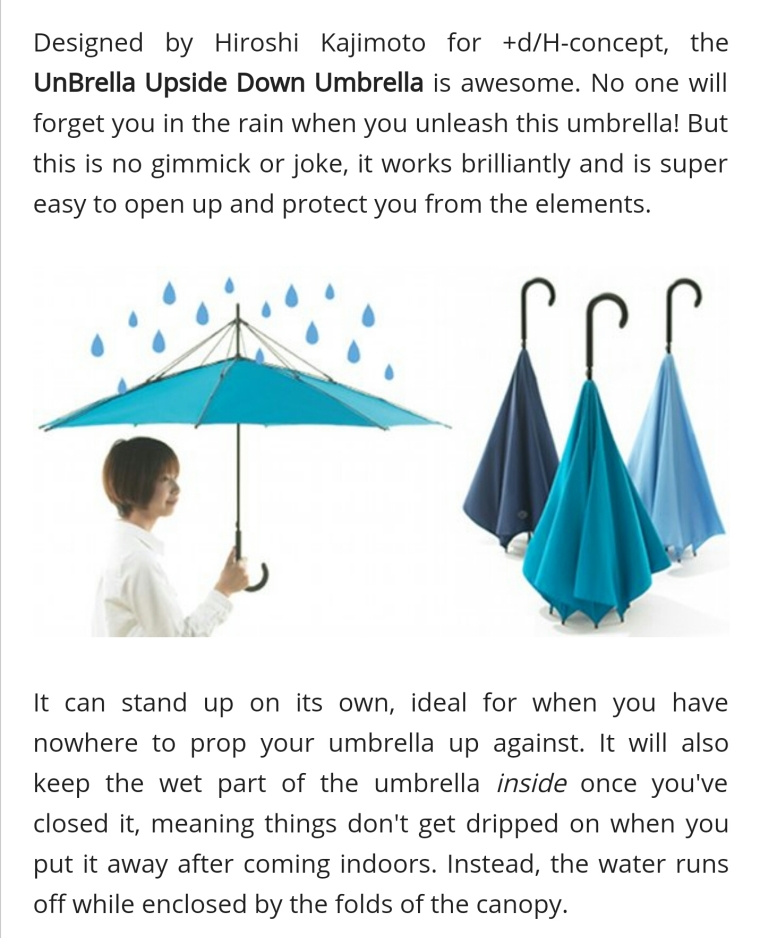 Okay, first of all, the wet part inside? Why would we want that? It makes sense for it to be outside because that way the—you know what, I’m over thinking it.

This is no gimmick or joke 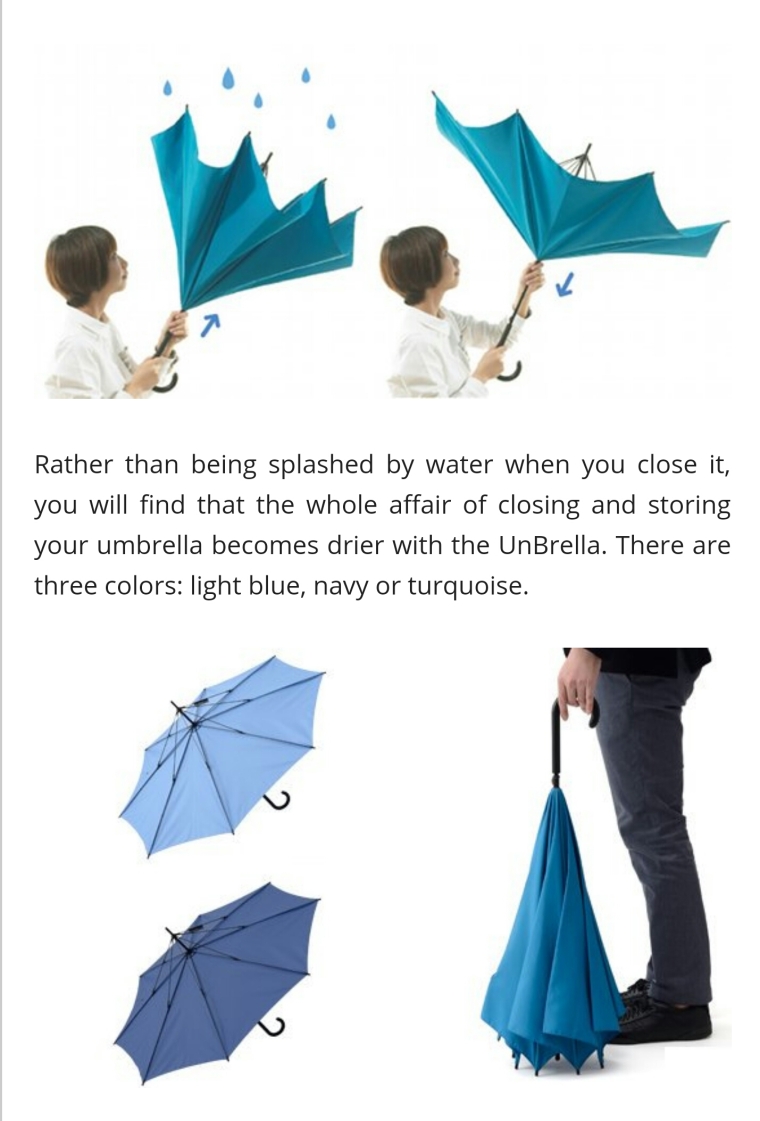 ….is this how people close their umbrellas? I never get wet when closing mine. Simple solution – hold it as far away from your person as possible. I love how they’re really trying to sell this, lol!

I bet the designer got back some dodgy umbrellas from the factory and they were like, ‘a ha! Want not waste not. Upside down umbrella. Boom. Unbrella. Boom. $192. Double boom.’

Yes… because they’ll be wondering who the moron with the ridiculous umbrella is and why they’ve wasted their money on it.

Also, what happens if it’s windy and the wind turns the unbrella into an umbrella? No wait. An upside down unbrella. At least I assume that’s what will happen. It’s either that or it’ll erupt into a ball of glitter.

If you’re wondering why my blog has turned into a random mess of posts – this is what happens when you lose interest in why your blog was initially based on! Even when they decide that they want to do a crossover with Scooby-Doo (see previous post) whom I love enough to want this crossover to die in a fiery pit of molten ash.

I don’t doubt that the Japanese love fake food samples so much but…$120. I don’t think so, mate. I’d need some actual food with my purchase and even then, I’d need a hundred dollar discount and free delivery.  END_OF_DOCUMENT_TOKEN_TO_BE_REPLACED

This isn’t a new recap, but I found an old document with my thoughts on the episode and it was hilarious to me, so to anyone who misses my recaps – this is for you!

I’ve had a chance to watch it again, without feeling like I’m going to throw up

…off to a good start!

Sam addresses the body issue and makes Ruby take Ruby 1.5 back (NOOOO!!). Then we see Jane Doe in hospital and she’s in a coma and they call TOD and she becomes Ruby and Ruby 2.0 starts asking for fries (I hope she didn’t get any)

she gives him the ‘imagooddemonbecauseirememberwhatit’sliketobehumanandsoiknowwhatit’slikelosesomeone’ mumbo jumbo. Funny how she fails to mention that she wishes that she was like other demons…?? I mean isn’t that what she said to Dean when she spun him the same line?

On Dean and Anna:

I don’t want to see Dean and Anna being all lovey-dovey throughout the entire episode. But I’m not surprised that it’s Dean she’s gets with…but chemistry wise…I hope they make it believable because in the ep when they smiled at each other meaningfully I was all ‘why are they looking at each other like that…’ and it was more creepy than cute.

Lol! Now I remember that this was back when we all knew what would happen in the next episode because of the spoiler culture. Someone would more or less upload the script outline for each episode way in advance.

After a long jumbled block of text that makes little sense, I go on to assess each character.

Alistair
He was AWESOME!!!

Mark Rolston was audible at least! The other Alistair sounded like he had marbles in his mouth.

Castiel
I am in love with Castiel 🙂 In the sneak peek when Sam is like ‘Cas, please’ or whatever and just walks over puts the two fingers on Sam’s head and knocks him…that was hot…

Whaaaaaaat. In love. With Castiel! Wait, you know what, this was season 4, so I won’t judge myself. I also have no idea what I’m describing here. I’m sure that it was tepid at best.

Uriel
He called Ruby a stain!! *hugs Uriel* and in the next one he attacks her!! I love him 😀 (Not as much as Castiel)

Castiel&Uriel
Wow…what an entrance…10 secs of the ep and they still manage to steal it…especially Castiel….

Still not judging myself. Much.

Ruby
What a bitch.

Anna
I wanna know what she did! But I feel sorry for her…good actress as well. ‘smoke ’em if you got ’em – I liked that

…Well, I’ll take my word for it. I barely remember what this woman looks like!

Dean
It was great how he didn’t judge Sam and he just listened….that was so touching

Oh gosh, I still liked Dean at this point! This is the ultimate throwback.

Sam
His girlfriend gave him the evils cause he lost the knife…shame on you Sam. Ermmmm his mojo doesn’t work…uhoh…and KILL AN ANGEL SAM????? Oh boy…
Jared was amazing though

I was a really bad recapper back then because again, I have no idea what the hell I’m describing here. I’m sure that Jared truly was amazing, though.

More evidence that 2.0 is my ultimate fave.

Overall it was a good episode weakened by GC as Ruby, granted she was a lot better but still bad and she ruined Jared’s scenes.

Lmao. She was a lot better but still bad…. Hahahahha. Oh dear. What a backhanded compliment.

I vaguely remember this episode being the start of what killed the show. The neverending Angels vs Something battle. In that season it was demons, but 4.09 and the episode after were both terrible.

Anyway, I’ve blocked it out from memory thankfully.

Hollywood superstar Tom Hardy chased down and helped snare a moped thief after pursuing him through gardens and across a building site in south west London.

A witness said the Hollywood actor “switched into superhero mode” as he collared the man before checking him for weapons after the chase.

He sprinted through gardens and a building site before grabbing the thief by the scruff of the neck, and declaring, “I caught the c***,” said a witness.

This story amused me greatly, lol.

My first thought that he was probably method acting or putting some kind of future building climbing movie montage training into action, and my second was that he’s lucky he lives in Richmond (nice, posh, affluent area). You can never be certain what people are carrying on them these days. Hollywood training or not, I’m leaving the chasing and sprinting to the police, thanks.

I now have a title card, tagline and a made up production company. And possibly way too much time on my hands. END_OF_DOCUMENT_TOKEN_TO_BE_REPLACED

Or something like it. I will remember you all when I make it big. So far, there’s no plot but that’s only secondary here. Everyone knows that you don’t need any plot.

END_OF_DOCUMENT_TOKEN_TO_BE_REPLACED

We know what you're thinking – if only we had a film that starred the members of BSB and NSYNC?

We do. This June! pic.twitter.com/nptOYPINKp

I will be recapping this for my three readers.

LOOK AT THAT FAUXSTACHE. God bless Nick Carter. He will always be the superior Carter brother (Aaron is currently lost, but he will find his way back. I would DM him on Twitter but I’m scared at the prospect of his response – I hear he flashed his bum on some form of social media recently. No bueno).

Howie, boo, I hope you’re debt-free. I will forgive you this one lapse. Well. Second. His 90s goatee wasn’t the best choice.

Joey Fatone. Well. He’s no stranger to SyFy. I remember his three seconds in Jersey Shore Shark Attack. He also looks like a young-ish Jim Beaver on this poster. LMAO.

AJ.  Born to be a villain. But not born to have that awful make-up on his face.

I love that the tagline is LARGER THAN LIFE! I suppose LARGER THAN DIRTY POP! Or I DRIVE MYSELF CRAZY! would not have worked as well.

Anyway, it’s okay, Nick. I forgive you…I am sure it is contextual and everything….

Well. Let’s hope that Netflix pays him well for his [insert number] minute cameo on the GG revival.

I’m still on hiatus or whatever but I need to put this here so that I can come back and laugh at it later. In the meantime, I’m gonna go and pose with a cheeseburger and see if anybody wants to help me with my student loans.