It’s that time once again. I recommend the products, you decide which one is the least ridiculous and get yourself something special!

1. For the handyman coffee enthusiasts I present the Power Tool Battery Coffee Maker.

Power Tool Battery Coffee Maker CM501DZ means you’ll never be short of a cup of coffee even on a construction site, as long as you have a drill or other power tool lying around 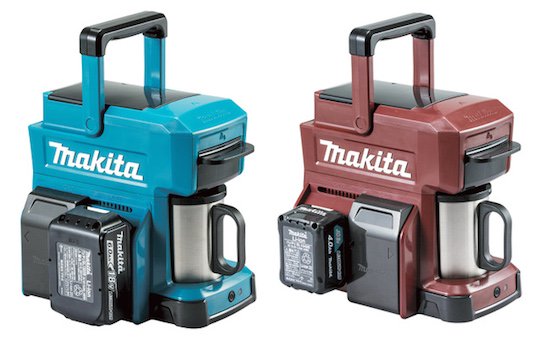 I suppose this is kind of cool in a really pointless kind of way. Out of all the things I’d design a coffee maker to look like, a power tool would be the last, but it could be worse.

2. For the helpless gadget enthusiasts or rabid tweeters, we have the Smartphone and Tablet Dual Holder.

We all need some extra arms sometimes and luckily Thanko is here to help. The Smartphone and Tablet Dual Holder will allow you to keep your gadgets always within reach and at eye level, without cluttering up your work station. The holders can swivel 360 degrees and hold a range of smartphone or tablet devices, including the iPhone 6.

Supernatural fans take note. This gadget will make it easier for you to earn more People’s Choice Awards for the highly esteemed cast! BUY BUY BUY!!!

3. For anyone who read or watched Cinderella and (confusingly) thought I want to be her! this Emma Glass Slipper might make your dreams come true.

Recreate those Cinderella moments with the Emma Glass Slipper. This is a beautiful footwear item genuinely made of glass, so be careful with it! Treat it carefully and give it to your true princess to wear. Available in a range of sizes. One shoe only.

Don’t expect any miracles at midnight, though. It’s only one shoe, so for a real Cinderella moment, you have to buy two. Where the Fresno is the fun in that? PASS. Imma let my coach turn back into a pumpkin or whatever it was. I forget.

4. For those who are willing to get some TLC from robots there’s the Robot Seal Healing Pet.

It looks creepy from all angles.

Paro is the most interactive “healing pet” made to date, designed to be used for animal therapy without needing actual animals that require special attention. It learns from you, and feels just like a real, lovable pet in its natural responses.

Paro is modeled on a baby seal and we’re sure you agree looks super cute! It has been approved by Guinness World Records as the most effective therapeutic pet of its kind.

…what was the Guinness World Records criteria? I’m genuinely interested. Snark aside, apparently it really does work.

They might need to work on the aesthetics, though.

5. For those who need something to let them know when they step in poop; there’s a Smell-Detecting Robot Dog out there with your name on it.

Oh, the irony. One makes the mess, one alerts you to the smell. Synergy. Hold on wait, apparently it detects nice smells too?

The Hana-chan Smell-Detecting Robotic Dog is a puppy with a sensor in her nose, allowing her to detect smells with entertaining results. If the smell is a nice one, Hana-chan will react with glee. But if it’s a bad odor, watch her respond negatively by playing dead! Have fun letting Hana-chan smell various things, from your socks to food. She will waggle her tail if the odor is “not too bad.” Let Hana-chan tell you if your feet stink!

Nice smells on the floor? So, I have to like, wash my carpet or spray my feet with Chanel No.7 for this thing to react with glee? It’s easier to just walk in poop and watch it play dead. Or, you know, use one of the five senses that God gave me.

Bonus: Ever wanted to smell like a sweaty sumo wrestler on your night out? Now you can!

Have you ever wanted to smell like a sumo wrestler? You can now, thanks to the J-Scent Sumo Wrestler Perfume by Luz, which specializes in scents influenced by Japanese culture. This fragrance is inspired by the genuine scent of sumo wrestlers. Spray some of this on your body and acquire the unique aroma of the traditional Japanese sport. Based on the smell of the hair oil used by sumo wrestlers, the scent contains eucalyptus, anise, violet, heliotrope, musk, patchouli, and sandalwood.

Can we have a Chris Hemsworth scent next? I always find it annoying that these handsome Australian men do various campaigns but they don’t put a picture of them on the box. It’s just rude. Looking at you, Hugo Boss and Givenchy.

That’s your lot, folks. I’ll be back soon.